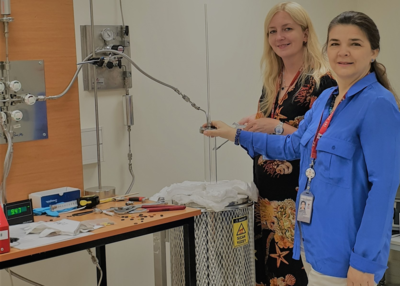 The RMG Researcher Mrs. Nedžadeta Mutapčić from Institute of Metrology of Bosnia and Herzegovina spent 3 months on the joint research work at TUBITAK UME in the temperature laboratory. The aim of this RMG was to facilitate knowledge transfer in high temperature measurements by the construction and validation of a new design of a fixed point cell operating at a temperature of 961.78 °C.

The RMG met its target, the RMG researcher in collaboration with the Project Coordinator Mrs Narcisa Arifović from TUBITAK UME developed, constructed and validated miniature silver (Ag) FP cells with IMBiH supplied materials (high purity silver metal (5N and 6 N), quartz and graphite parts). The RMG research activities were divided in two parts: the research activities within the first task were performed in the period from June to middle of July 2021 and second task activities were performed in the period from end August to middle of October 2021.

Based on the documents from WP2 of the EMPIR JRP 18RPT03 MetForTC project activities, a new design of miniature Ag FP cell was agreed. The construction and validation of the miniature cells were performed using TUBITAKs facilities and procedures.

Additional to the RMGs planned construction of one AgFP cell (6N silver metal) a second was constructed using the same design, but, filled with a different purity of silver metal (5N sliver metal). The 6N Ag FP miniature cell was at first characterized and then compared with TUBITAK AgFP standard cell (Ag 189) according to TUBITAK’s procedure for comparison of ITS-90 fixed-point cells.

The calculated measurement uncertainty was 0,005 °C. The second 5N Ag FP was recently also tested at TUBITAK and will in the future be characterized and compared at IMBiH. The knowledge transfer in high temperature measurements received by the IMBiH RMG Researcher from TUBITAK, consisted of hands-on training in the construction, validation and calculation of uncertainty for a new design of fixed point cells.

The RMG researcher will share experience from this work and together with colleagues from IMBIH Temperature laboratory continue to work on this topic. The calibration facility at IMBiH will be improved further. The knowledge gained allowed the RMG researcher to efficiently use the facilities and perform high-temperature calibrations with improved uncertainties for calibrations in fixed-point cells.